One of the top items on our bucket lists that I’m glad we finally checked (not off, because we still want to go camping again!), is camping in the Australian outback.

Although initially I was quite upset that I’d accidentally booked us on a camping trip the week of the full moon, it wasn’t an issue in the end. We had the treat of watching the moon rise over Uluru the first evening, and on subsequent evenings, the clouds overhead obscured most of the stars anyway.

We slept at three different sites on the trip: at Ayers Rock Resort in Uluru, at Kings Canyon Site, and finally at a private bush camp, Curtain Springs Site. Curtain Springs was the most basic of the three campsite, without electricity or running water. Heck, even the “toilet” was a pit dug out with three zinc walls. It was however, the group’s favorite campsite since we had the entire area to ourselves, minus the occasional pack of dingos we could hear howling through the night. By then, we had also grown accustomed to spending time with one another, and happily huddled together by the roaring fire we fed from dead trees we uprooted.

As with every meal we had outback, everyone pitched in to make dinner. Our guide Chris made soda bread which he baked in a pot heated with glowing coals from the fire, while Luiz, an actual chef in his past life, led the cooking of the bolognese pasta. 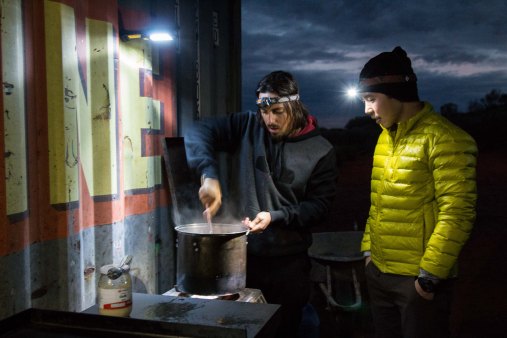 Although the evening was the chilliest yet, the heat from the fire was comforting. Bellies full and eyelids heavy after the excitement of the day, we rolled out our swags in a circle around the fire and settled in for the night. 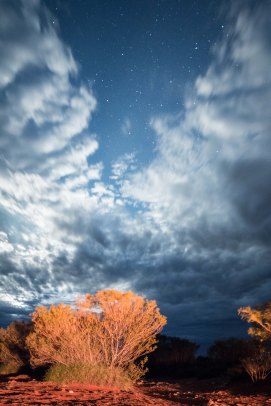 Initially, we were somewhat worried that it might rain through the night, but it held. At different points through the night I’d open my eyes and see either big patches of clear sky or fast moving clouds rolling across the moonlit sky. 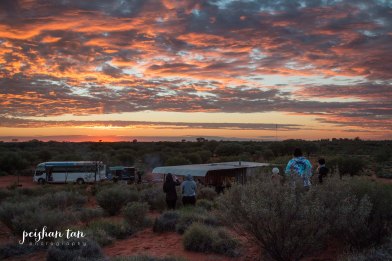 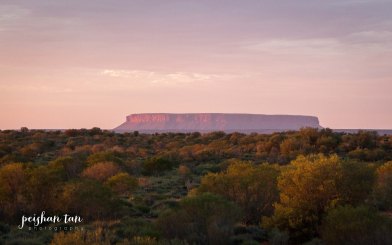 All too soon, the sun rose the next morning, marking an end to our camping in the outback.

2 Replies to “Camping in the Outback”