We were supposed to go camping in Kiama a couple of weeks ago with a bunch of friends. It was a new-moon weekend, perfect for astrophotography. Alas, I caught a cold at the last minute, so Jeff and I regrettably had to drop out. From the pictures, everyone else looked like they had a blast, so we had a huge case of FOMO. So this past weekend, we loaded our car with snorkel gear and kayaks, and drove down the coast.

It was swell. Although it was quite chilly out, snorkeling at Bushrangers Bay in Shellharbour was awesome. Right at the start of our snorkel, we spotted a giant cuttlefish – maybe a foot long. We followed it for quite a while, taking our fill of photographs and videos, then spied another resting by a clump of sea grass. We spotted 3 more cuttlefish by the time we got too cold to continue – plus a humongous Australian Short Tail Stingray gliding by below us.

We caught the sunset by the famed Cathedral Rock, where I crouched down in a teeny tiny nook between huge boulders, with the tide fast lapping at my feet. A couple was watching the colours (a bit too muted, alas) near us too, and Jeff ended up helping film the guy’s proposal. 🙂

In the deepening twilight, we spotted a pod of dolphins swimming the length of the beach just offshore. 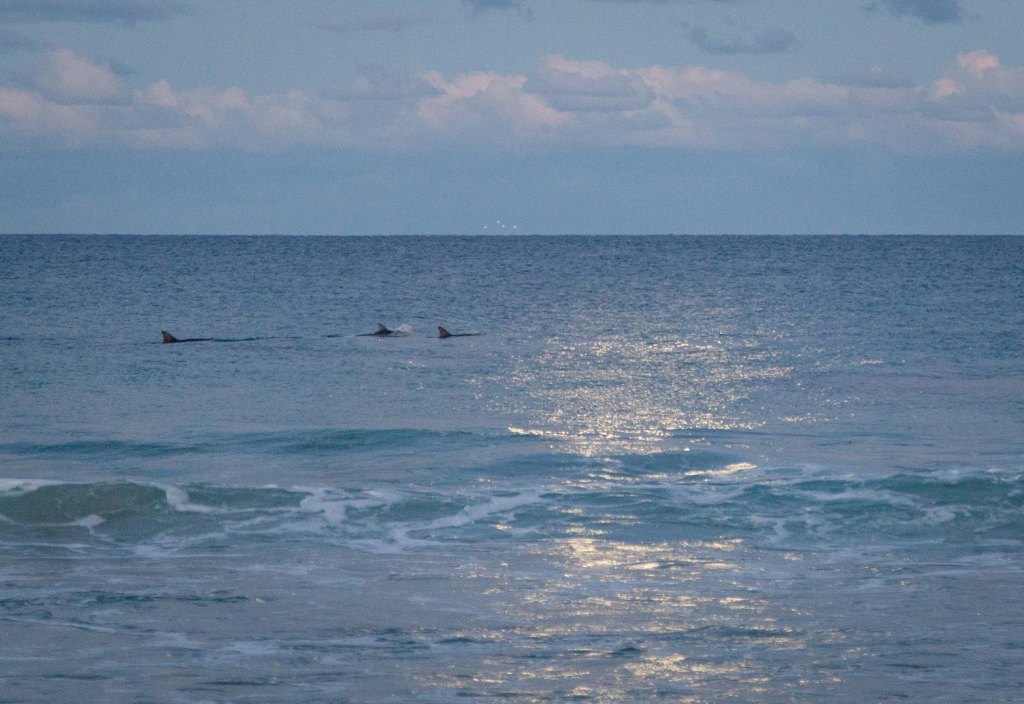 After dinner, under the full moonlight, we ventured down to Bombo Quarry for a bit of exploration. Our mind was blown by how much light the camera could pick up. Even with just a couple of seconds’ exposure, everyone was lit up, almost as bright as day. Initially, I’d been a tad disappointed at not being able to take pictures of the milky way, but I think I’m a full moon convert now. Granted, the milky way isn’t as prominent under the full moon, but I love how everything else just jumps out. 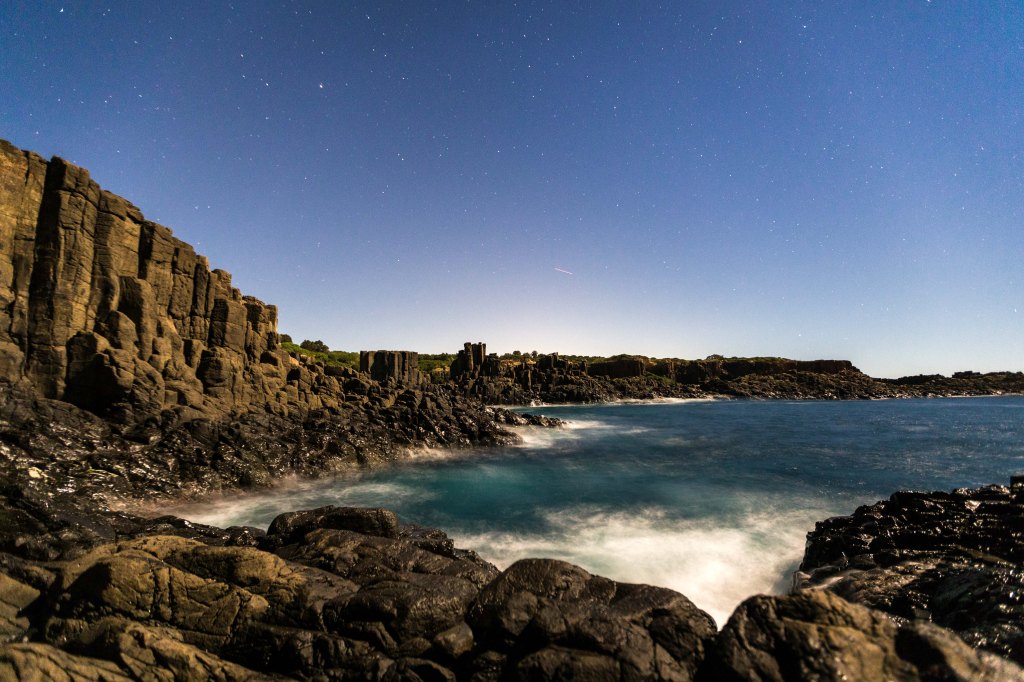 And before heading back to Sydney and real life the next morning, we went for a bit of a paddle up the coast, squinting out in the horizon for those tell tale spots. No luck alas, even though we’d spied two active pods the day before. Can’t complain though, it was still a very awesome weekend. 😀

In searching for places to take sunrise photography at Kiama, I kept coming across waves crashing against Cathedral Rocks. So I simply looked up the location on Google Maps the morning of and headed over. There’s a lesson in that: if possible, recce the location the day before. For when we arrived, we realized the Google Maps had placed the location of Cathedral Rocks a mile away from where it actually was. From where we stood (getting eaten by mosquitoes) we could only catch a glimpse of its behind (behind the scene in the above picture). 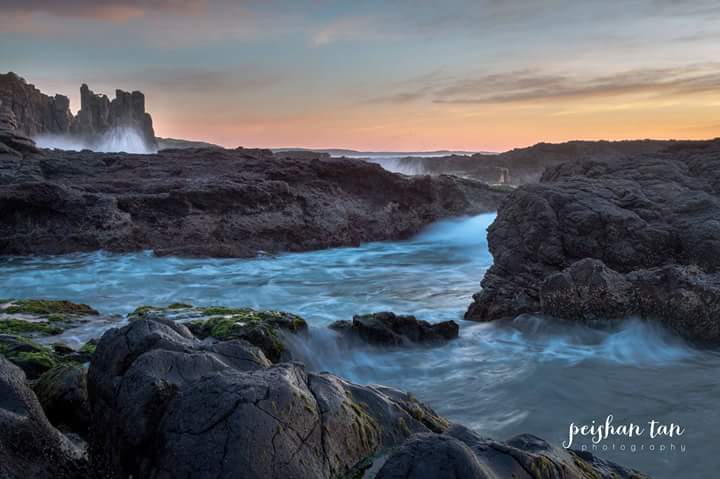 We woke up early to catch the sunrise over at Kiama. Good thing for spring – it isn’t too cold in the morning. The downside – the mosquitoes are back out again. Within minutes, the four of us were slapping and scratching at ourselves incessantly.

It was a nice sunrise though. Not the prettiest, because of the low cloud cover, but the scenery was lovely.

Afterwards, we went back to our apartment, tucked into a big breakfast of prosciutto and eggs, then fell back asleep. Exactly how a vacation should be, in my books at least.

My brother and his girlfriend flew into Sydney this morning and immediately drove down to Kiama to join us. We went for a short but gorgeous paddle down the Minnamurra River, then to Killalea State Park to catch the sunset. … And to surreptitiously photograph my brother proposing! 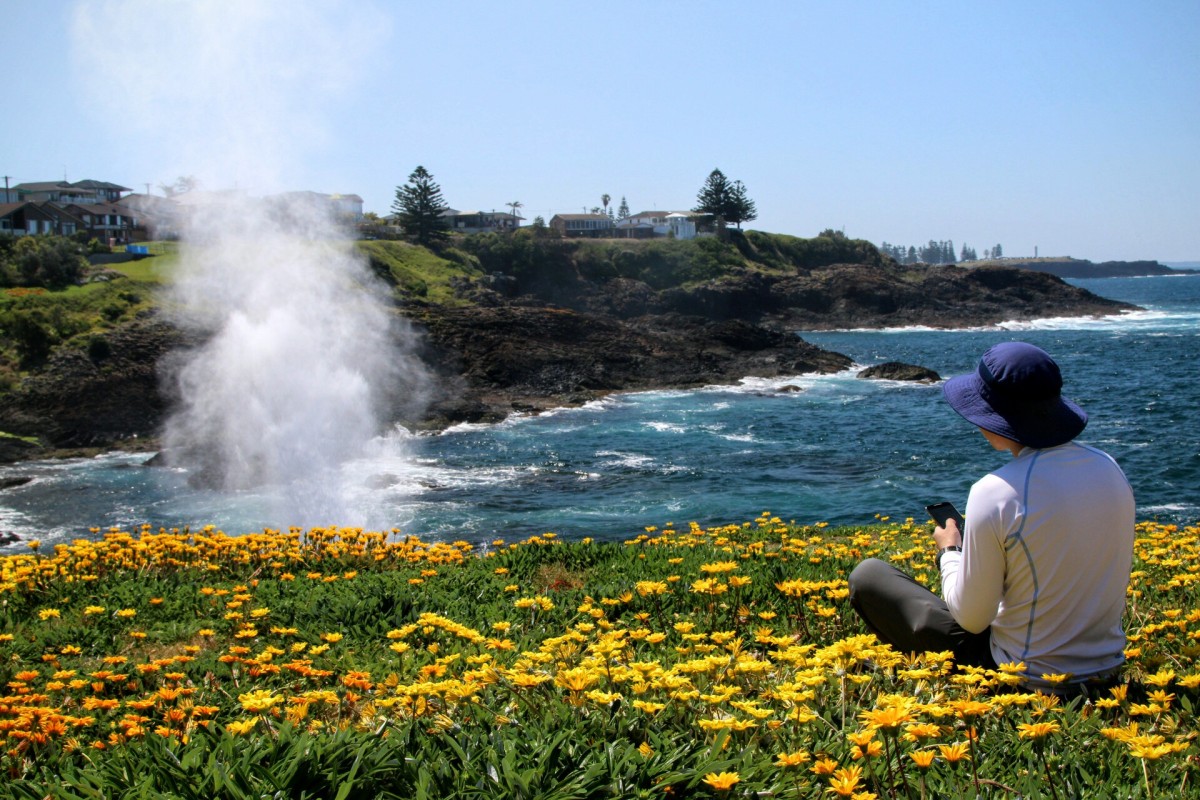 Warmest day in months so far! Loving it though. Found this lovely spot by the Little Blowhole in Kiama to sit back and literally smell the flowers.